COVID-19 Updates & Policies: All donation drop-offs must be scheduled by calling the House nearest you. Learn more about our updated donation policy here. For more updates and ways to help us during this time, click here. 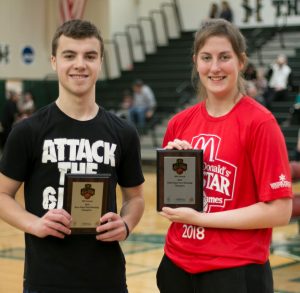 Josh Titus and Patrick Thibodeau Spirit of the Game Awards

For many years, the Maine McDonald’s High School Senior All-Star Basketball Games has honored athletes that excel on the court and in the classroom. In 2009, the Maine McDonald’s Spirit of the Game Award was introduced to honor two high school students involved in the basketball program – one from the East and one from the West Division – who embody the spirit of the sport, exemplify sportsmanship, show an ability to overcome obstacles and boundaries, and support and inspire their teammates and coaching staff.

Two Maine athletes, Patrick Thibodeau and the late Joshua Titus, inspired this award. Though collectively the boys only played two games in High School, they inspired many in their community and showed a great commitment to their respective schools basketball programs. Josh and Patrick were nationally recognized, appearing on CBS Sports Final Four broadcast and received additional awards and recognition including the Boston Celtic’s Heroes Among Us Award. In honor of these two young men who inspired America, the awards have been named the Joshua Titus Spirit of the Game Award; Patrick Thibodeau Spirit of the Game Award.

The Bob Brown Contributor Award is presented to an individual who has made significant contributions to improve the quality of basketball in the state of Maine.

The MABC Media Award is presented each year to an individual in the media for their outstanding coverage of high school basketball in the state of Maine.

MABC Coach of the Year Awards

Each year, the MABC selects a Coach of the Year. This award recognizes coaches from throughout the state who have demonstrated excellence in their profession. They bring our the best in their players, always going above and beyond.  Coaching peers vote to determine who receives this award.

The Mister and Miss Basketball Award is presented each year to the senior player who has exhibited outstanding skills throughout his/her career, has made a significant impact on his/her team, has demonstrated respect for the game through leadership on and off the court, has epitomized the values of sportsmanship, and has been a positive school and community citizen.