It all began in Philadelphia in 1974 when three-year-old Kim Hill — daughter of Philadelphia Eagles football player Fred Hill and his wife, Fran — was being treated for leukemia at St. Christopher’s Hospital for Children.

During Kim’s three years of treatment, the Hills often camped out on hospital chairs and benches and ate makeshift meals out of vending machines, all while watching other parents do the same. They learned that many families traveled great distances to bring their children to the medical facility and couldn’t afford hotel rooms.

The Hills knew there had to be a better way. Fred rallied the support of his Eagles teammates to raise funds. Through Jim Murray, the Eagles’ general manager, the team offered its support to Dr. Audrey Evans, head of the pediatric oncology unit at Children’s Hospital of Philadelphia. Dr. Evans dreamed of a comfortable temporary residence for families of children being treated at her hospital. 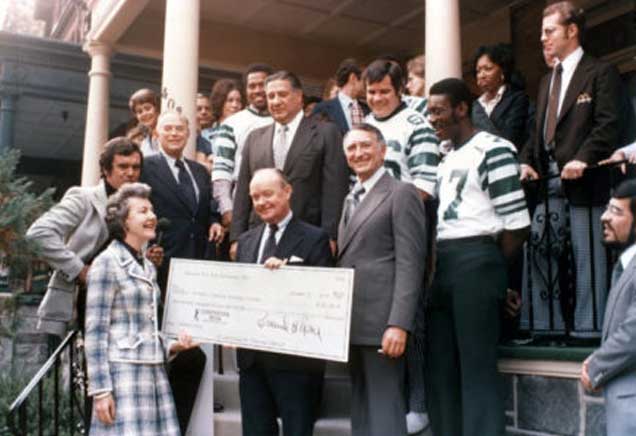 And, thus, the first Ronald McDonald House came to be.

By 1979, 10 more houses opened. By 1984, local communities founded another 60 houses (including the Ronald McDonald House in Albany); then 53 more opened by 1989. Today, more than 377 Ronald McDonald House programs operate in 45 countries and regions around the world, providing comfort and support to more than 10 million families since 1974.

Our story begins with the first House to be built in Maine, the Ronald McDonald House Bangor, and it all starts in 1970. Anita Haskell’s son, Raisch, was diagnosed with a rare form of cancer that could only be treated in New York City. At that time Ronald McDonald House did not exist and Anita’s only option was to sleep on the floor of the hospital room to be near her son.

In November 1978, Anita joined a newly formed parents group called the Candlelighters which was headed by John Bagley to support Dr. Demetrius Traggis’ new pediatric oncology practice at Eastern Maine Medical Center. This was one of the first pediatric oncology practices to be established in Maine, even before the Maine Children’s Cancer Program in Portland. This group had learned of the Maine McDonald’s statewide “McHappy Day” promotion that supported the Ronald McDonald House in Boston. The group began making connections with McDonald’s and Arnold Worldwide for help with opening their own Ronald McDonald House.

Coincidentally, at this same time, Meredith Strang Burgess was working for the McDonald’s Corporation in Boston through Arnold Worldwide and had recently approached the Maine McDonald’s Co-Op about adding the recently opened (May 1979) Boston Ronald McDonald House (RMH) to their list of charities to receive funding from their in-store fundraisers. After some research and preparation, her presentation showed that 50% of the families who stay at the Boston RMH in the first six months of opening had been from Maine. Her case for support to grant funds to the Boston RMH easily won over the Maine McDonald’s Owner/Operators with the support of the Belanger families and their daughter, Diane who lived in Gardiner, Maine and utilized the services of the Boston RMH.

As new concept discussions often go, the Candlelight Group, including Anita Haskell and Terry Grindle spent several months in conversations with the Maine McDonald’s Owner/Operators. From their sharing stories and experiences, the group received full support to conduct a feasibility study and to contact the McDonald’s Corporation and Arnold Worldwide, McDonald’s PR and marketing agency to begin the exploratory process of bringing a Ronald McDonald House to Maine. On November 13, 1982, Our House of Maine, Inc. was incorporated with a Board of Directors elected to establish a Ronald McDonald House in Bangor, Maine.

Eastern Maine Medical Center and its CFO, Jim Coffey, were extremely supportive in providing space to meet as well as administrative oversight of the financials. The Belanger family, whose story to the Maine McDonald’s Owner/Operators won their hearts and support for the Boston RMH, jumped right to action to support a Ronald McDonald House opening in Maine. One of their most remarkable feats was when Lorraine Belanger called up a family friend who worked for Governor Brennan and miraculously managed to secure a property for the future Ronald McDonald House in Bangor – the property, which sat unused for many years, the Bangor Mental Health Institute’s Superintendent’s House was donated to Our House of Maine for $1.

Along with the Candlelighters’ parents’ group, Our House of Maine Board of Directors, the Belanger family along with their daughter Diane, funds were raised to renovate the old Superintendent’s House. Through hard work, passion, and an active group of parents, the 30th Ronald McDonald House opened the doors of a 14-guestroom facility in Bangor, Maine on December 16, 1983. Sadly, Diane Belanger passed away before the Bangor House opened, but the dedication she and her family showed has made a tremendous impact on the hundreds of families who have walked through its doors.

Now jump to 1985, Joseph (Joe) Foley, Sr., a Portland native, and his wife Catherine, received a phone call from their child’s college, that no parent wants to get; their son had suffered a traumatic injury.  Joe and Catherine quickly got on the road from Portland, Maine to spend over 3 months at the Ronald McDonald House in Burlington, Vermont while their son made a miraculous recovery. Suffice to say, Joe was left with a lasting impression of Ronald McDonald House and the services it had provided his family during their time of need.

Once Joe and his family were settled back in Portland, he began conversations with Meredith Strang Burgess about bringing a Ronald McDonald House to Portland. Meredith brought his request to the Maine McDonald’s Owner/Operators. Unfortunately, it was declined because they had just opened the Bangor House and did not feel comfortable committing to support another Ronald McDonald House so soon after Bangor opened. The declination letter from Meredith to Joe is something they spoke of often because it didn’t slow him down. He began making relationships with key stakeholders, including the Portland Rotary Club, whose support helped fundraise and spread the word about this dream. But Joe knew the Rotary Club alone couldn’t open and fund a house of this size, so he went back to the Maine McDonald’s Owner/Operators and by that time, they were ready to begin the process.

In 2005, it became evident our fifteen (15) guest rooms were insufficient to meet the growing needs of Maine Medical Center and other medical facilities in the greater Portland area. After numerous meetings with our architect, neighbors, neighborhood associations, the Historic Preservation Board, the Portland Planning Board, and the City Council, a plan was set in motion to renovate the existing House and expand into 63 Carleton Street with six (6) additional guest rooms.

Over a quarter of a century later, through the hard work, generosity, and kindness of all who have served on our Board of Directors, our Maine McDonald’s Owner/Operators, volunteers, medical community, civic organizations, corporate partners, private foundations, state government personnel, individual donors from Maine and beyond, the expert design of Scott Simons Architects, original construction by Pochebit Construction, the 2006 expansion by The Thaxter Company, and our most recent 2020 expansion by Wright-Ryan Construction, our Portland House is an amazing 23,369 square foot facility that now accommodates up to 36 families each night. We are able to provide a home away from home for families during their child’s medical journey.

We are owned and operated by RMHC Maine, a Maine non-profit corporation providing a supportive environment at each House made possible by dedicated volunteers, staff, and other guest families. Our statewide programs provide comfort and care to those in need of the love, understanding, and emotional support essential for their child’s recovery from illness or injury.