Posted at 13:29h in Family Stories by Lauren

Staying at the Ronald McDonald House in Portland was life-changing…

It allowed me to be close to my son, Declan, while he received care at Maine Medical Center. I live about 2 1/2 hours away from the hospital, and I’m not sure what I would have done if it wasn’t for this organization.

Declan was born at 28 weeks, weighing 2.14 lbs. Around 2 to 3 weeks of life, he suffered from Osteomyelitis. This is a rare bone infection that only around 200,000 people face per year. At just 3 weeks old and a fragile 3lbs, he had to have knee surgery. He later endured a brain bleed and heart surgery to close a patent ductus arteriosus (PDA). He had chronic lung disease and was on oxygen support for most of his stay in the NICU.  These were all among other troubling medical events, such as bradycardia and resuscitation due to medications and breathing difficulties. But he was a fighter.

Declan stayed in the NICU for 86 days. During this time, I called the Ronald McDonald House my home. My time there was bittersweet. Though these were extremely stressful times, the House offered much-needed support, allowed me to stay close to my son through his surgery and recovery process, and felt like home. I had a place to rest, shower, do laundry, vent, connect with others, and eat meals. On the hardest days, it was a place to lay my head down to cry and then pick myself back up. These moments of breaking down and self-care are important, especially through stressful times. Not having to worry about gas or travel expenses also made the journey more manageable. I had so much going on. Being a single mother was hard, as Declan’s father left us shortly after he was born. 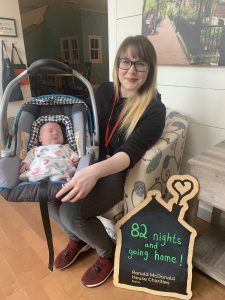 Emily and baby Declan are going home after 82 nights at our Portland House!

Due to the COVID-19 pandemic and temporary hospital policies, I was unable to have any visitors or in-person support throughout much of my stay. Despite staying at the house by myself, I knew I wasn’t in this alone. During my stay, there was a small group of families at the House who also had boys in the NICU. It was helpful to have camaraderie with the families and staff. We became closely bonded, learned each other’s stories, and rallied behind one another. I felt supported during such trying times. Having a premature baby in NICU takes an emotional toll—a struggle the other families could understand. The staff were caring and invested, checking in often and providing a listening ear. Small gestures, such as presents on Mother’s Day, were uplifting and brought so much positivity to the day.

After 86 days in the NICU for Declan and 82 nights at the House for me, our journey finally came to a close. Declan was discharged and I was able to bring him to meet the staff who had heard so much about him. It was a long-awaited moment I will never forget. Even after leaving, staff checked in and wanted updates on Declan’s progress. I’ll always remember the support and generosity of the Ronald McDonald House. RMHC Maine made a lifelong impact and our connection will never be forgotten.

~Emily, mom to a NICU warrior