Posted at 15:50h in Family Stories by Lauren 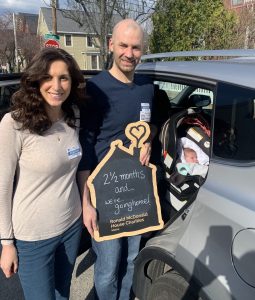 Kieren’s arrival was a surprise to everyone. At 27 weeks, Kelly found herself in New Hampshire with her two young daughters, two hours away from her home in Boston. Her water unexpectedly broke and she was transported by ambulance to Maine Medical Center in Portland. Dad, Tony, rushed from Boston, fearful of what was in store. This would become the beginning of a long and stressful months-long medical journey.

Once at the hospital, Kelly was put on bed rest and medical staff were able to delay Kieren’s birth for 9 days. He arrived at 29 weeks via c-section to spend the next two and a half months fighting for his life. Tony and Kelly turned to Ronald McDonald House in Portland in need of refuge to ride out the storm.

“It was everything we could have asked for.”

When Tony and Kelly walked into the House, a weight was lifted. They quickly realized it wasn’t a hotel or simply a place to sleep. It was a warm home-like environment filled with anything they could need—all within a 5-minute walk to their child. The House offered meals (including vegetarian meals!), toiletries, laundry facilities, comfortable beds, and a break from the sterile hospital environment. It offered a sigh of relief.

The first few weeks of their stay, baby Kieren was in poor condition and his future was uncertain. Almost daily, his parents were faced with the unthinkable question: Do we continue to care? Filled with hope and deep-seated love, Tony and Kelly pressed on, spending every possible moment in his presence.

The doctors suspect it was their attentive and hands-on approach that contributed to baby Kieren’s improvement. The hours of skin-to-skin contact and the hundreds of books read not only showered Kieren in love but helped him heal and allow neurons to make connections in the brain. His initial respiratory challenges and alarming brain scans turned around by discharge, the point where he didn’t need any respiratory support his final MRI was clean.

Had it not been for their close proximity, the family would have missed out on days and hours of holding their precious son. The outcome, doctors say, could have been vastly different were it not for that.

While navigating the highs and lows of their son’s medical journey, a global pandemic emerged and gripped the nation. Stressors, limitations, and uncertainty grew. On March 15, their journey became more challenging. Their daughters’ preschool had shut down, childcare was suspended, and the NICU began limiting access to one visitor. Tony returned to Boston to care for their daughters while Kelly remained in Portland by Kieren’s side. With their list of worries long, it was a relief for Tony to know that his partner was safe and cared for. In fact, it was one of the few things he didn’t have to worry about. 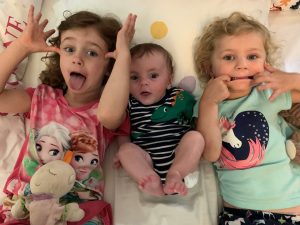 The journey was long and oftentimes grim, but Kieren persevered. After 2 and half months in the NICU, he was discharged and the family of five could finally unite. Today, Kieren is home and doing as well as his family could possibly hope for. Though his journey was fraught with uncertainty, he could always be certain his parents were near thanks to the Ronald McDonald House in Portland.